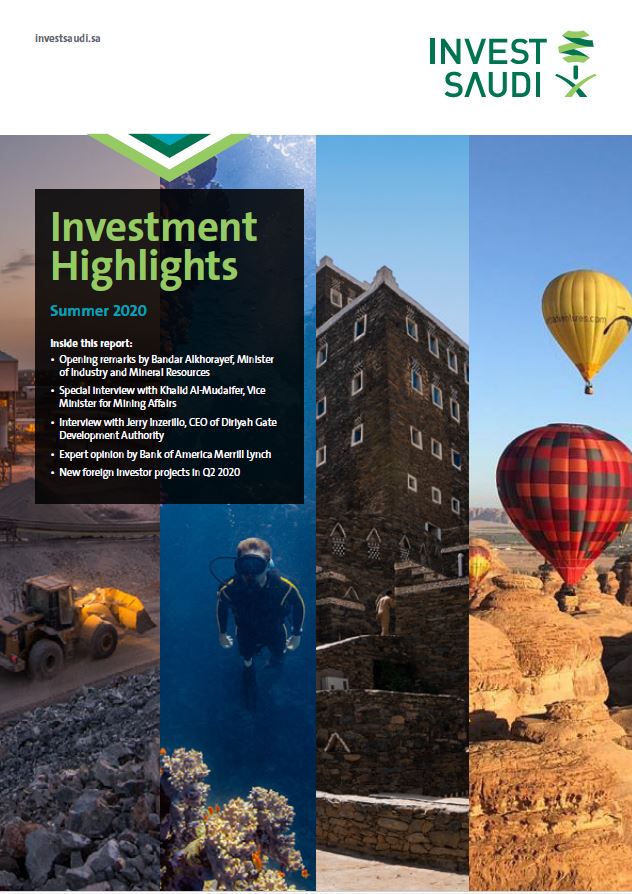 In this edition of Investment Highlights, the Ministry of Investment of Saudi Arabia (MISA) announced that 506 new international companies were granted investor licenses during H1 2020. The figures came after 20% year-on-year growth in Q1 was followed by a 47% year-on-year decline in Q2, largely due to the impact of the COVID-19 pandemic on the global economy.

However, in more positive news, the data showed an increase in economic activity towards the end of Q2 – suggesting that the economy may be experiencing significant catch-up growth as the Kingdom cautiously lifted some of its lockdown measures.

This edition of Investment Highlights contains a special feature on Saudi Arabia’s mining sector, following the announcement of a new mining law in June 2020. This includes an interview with Khalid Al-Mudaifer, Vice Minister for Mining Affairs at the Ministry of Industry and Mineral Resources (MIM). Saudi Arabia’s mining sector is in its early stages of development and full of potential, with metals and minerals reserves worth an estimated $1.3 trillion.

Also, inside this report are opening remarks from Bander Alkhorayef, Minister of Industry and Mineral Resources, an update on the mega projects with an interview with Jerry Inzerillo, CEO of the Diriyah Gate Development Authority (DGDA), and much more.

Our site uses cookies to help us improve the user experience. By using the site, you consent to the use of these cookies.